Inuits has also produced a number of campaign page implementations designed for Nelonen Media's customer promotions. The implementations are often multi-channel (radio, TV, and network), where the role of the campaign page is to activate and engage consumers online. For example, multi-choice, tests, or gambling have been used as a means of activation, so that public engagements are successful.

The solution to the Sana-sol Vitanallet campaign was approached through an engaging realization of the target group of the active age, which was intended to raise the interest of the target group in a positive way. The campaign was accompanied by a playful interactive spot in which the viewer could participate in the Vitanallet product lottery via a fun game. Inuits was responsible for the design and technical implementation of the gaming mechanism and visual appearance. The gaming mechanism hooked the viewers in an unprecedented way and the campaign was really successful! 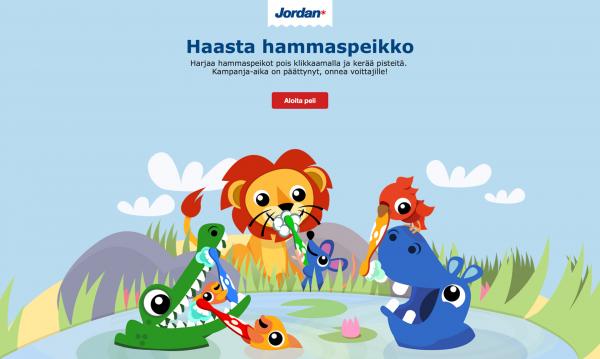 Inuits implemented the Jordan children's Step by Step toothbrush series www.haastahammaspeikko.fi campaign page to activate families with children. A simple but creative implementation made both children and adults  play a toothpick game on the campaign page. Inuits was responsible for the visual design, game animation and technical implementation. The implementation of the terminal-independent game was more likely to make children's toothbrushing more fun and, based on the number of visitors to the site and the number of games played, the campaign was successful.